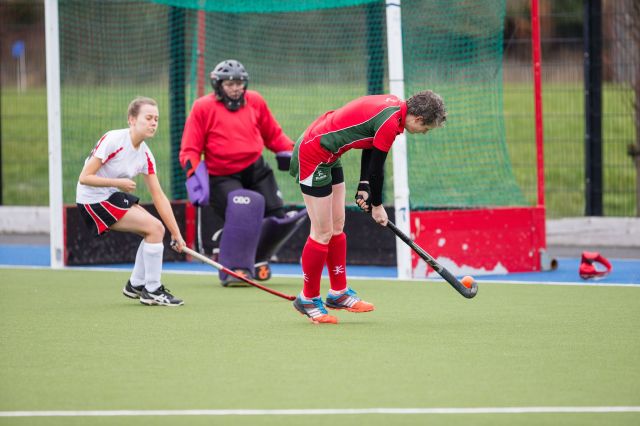 Carolyn in action against South Antrim

Playing into the fierce, frigid wind in the first half, Donaghadee had first pass back and quickly had the opportunity to test the visiting defence with lots of pressure in the attacking 25. The final ball inside the circle was missing though and South Antrim were able to clear the danger on several occasions.

One clearance was a booming ball that sliced through many of the players on the pitch, with a South Antrim forward latching on as she cut in from the right. With the ball bobbling about all over the place in the circle, it was a horrible one for the Dee defence to deal with and it somehow snuck over the line to give South the lead.

There continued to be plenty of industry all over the pitch for Donaghadee, and although they did create chances in the attacking circle, the South Antrim keeper was on her mettle to keep her side’s nose in front – a lead which they never relinquished.

Final score 1-0 to South Antrim. Thanks to Brian McKee for umpiring. The 1XI are next in action away to Holywood.

Minor Plate: Holywood 2XI 3-2 Donaghadee LHC 2XI
DLHC 2XI took on league rivals Holywood 2XI away in the Minor Plate last Saturday. After a very closely fought defeat in the league, Donaghadee were determined to try and control this game from the outset. The Dee side seemed to have a spark about them this week showing a competitive will to win which may have been missing in recent weeks, and they started well – putting Holywood immediately under pressure.

Karen and Elle Fegan kept Holywood at bay with some great tackles and distribution. Lynsey Sloan teamed up well with Carmen van der Schyff and Rebecca Bolton to drive the ball forward into the Holywood circle on numerous occasions but the Dee were just missing that final touch. At the other end Holywood made several breaking attacks but with Natalie Jamieson controlling the back line these were easily dealt with.

Donaghadee were certainly dominating the game; much of the play was in the Holywood half with Dee searching for that goal that was so clearly coming. A penalty corner was awarded to Donaghadee which Karen Fegan smashed home into the right hand corner putting the Dee 1-0 ahead.

After half time Donaghadee started as they had finished the first half. Great hit outs from Natalie linked up with Vicky O’Neill and Maura Hennessy with both girls eagerly trying to get another goal.

Not long into second half Lynsey distributed the ball to Maura who found a line through to Vicky on the right hand post. Vicky did really well to push it across the line on her reverse stick to make it 2-0 to Donaghadee.

Holywood responded and were definitely stepping it up a gear with vocal support from their bench but Lisa Alexander and Georgia Ferguson were managing to keep them out.
The game continued a close battle with Holywood then being awarded a few penalty corners in close succession.

The Dee defence found themselves under more pressure than earlier parts of the game and Holywood were showing no signs of backing off. In the last third of the game Donaghadee undeservedly conceded 3 goals, the majority being from scuffles in the goalmouth which keeper Teegan Greer had no chance of seeing despite saving initial shots and keeping Holywood out for so long. The final score finished 3-2 to Holywood.

The Seconds will take the many positive points from this game going forward into the rest of the season: their excellent performance for the majority of the match; where they began to find their voices, calling and supporting each other; the formation and positions that players seemed to have adapted well to and show signs of settling in; the vast number of scoring opportunities and leading the game 2-0 for as long as they did. More of the same next week!

Miss last week’s 1XI action in the Intermediate Cup or the 2XI at home to South Antrim? Read it all here >>>

Online home of Donaghadee Ladies Hockey Club. You can also find us on Facebook /DonaghadeeLHC and @DonaghadeeLHC on Twitter.
View all posts by Donaghadee LHC →
This entry was posted in 2016/2017 Match Reports and tagged holywood, minor plate, south antrim. Bookmark the permalink.
Loading Comments...