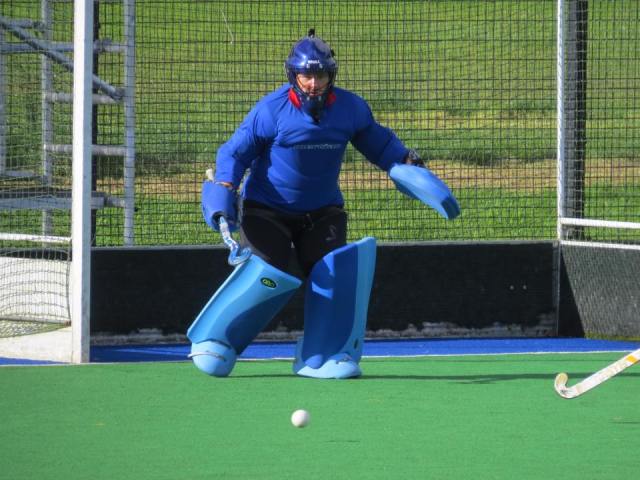 As has been their wont this season, Donaghadee started brightly, enjoying long spells of possession in the early stages with much of the play taking place in Instonians’ defensive quarter of the pitch. The home defence remained strong however and prevented any chances Donaghadee had of scoring; Leanna McGimpsey-Young and Laura Boyle rotating up front with Hannah McAdam and Emma McGimpsey-Young as the Dee tried to break the deadlock.

Donaghadee were then caught out by a swift counter-attack in what seemed to be Instonians’ first window of attacking play; the ball dribbling over the Dee goal line to give the hosts the lead. A further break by the home side shortly afterwards led to another attempt at goal however Siobhan McAdam in goals and the defence of Paige Reilly, Ali Stevenson and Amy Long surrounding her, did well to clear the ball.

Donaghadee did their best to equalise with a penalty corner when Kerry Kennedy and Catherine Armstrong combined to force a shot on goal just before half time but the Instonians goalkeeper managed to clear the danger to ensure her side went in to the half time break in the lead.

With a change of positions Donaghadee came out with more attacking hockey in the second half: some lovely interplay saw the midfield of Sarah-Louise Baird, Helen Hooks and Lisa Higgins feeding the ball forwards as Donaghadee searched for the equaliser. One great link up saw Hannah mere inches away from tipping in at the right hand post, while Catherine made plenty of speedy yards down the right.

Despite more sustained pressure with long corners and sideline balls deep into attacking territory, Donaghadee were unable to capitalise before the final whistle, leaving the final score 1-0 to Instonians. Thanks to Brian McKee for umpiring. The Firsts take a break from league action this weekend as they travel to Larne for a 1pm passback on Saturday in the first round of the Intermediate Cup. 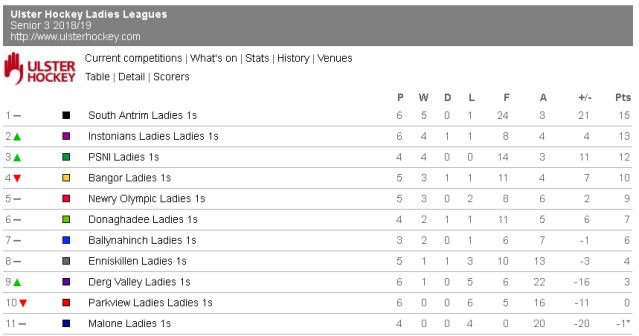 Minor Cup Round 1: DLHC 2XI 1-2 Dromore 4XI
The game got off to a quick start with both teams evenly matched and great end to end play. The Donaghadee defence was called into action early on and Nicola Patton in goals was kept busy with plenty of saves. In the heart of defence, Georgia Ferguson and Mia Park (in only her 2nd game for the Dee) kept Dromore at bay with some great tackles along with Natalie Jamieson who made some great runs up the pitch carrying the ball away from Donaghadee’s defensive circle.

Carmen Van der Schyff added to the team effort in thwarting goals by dropping back to a defensive screen this week along with Lisa Higgins playing a great game as always despite suffering from a heavy cold. Molly McKee, Erin Hamilton and Katie McKee once again shared the roles of left and right wing, displaying their youthful energy by running the legs off themselves in some great attacks along with centre Vicky O’Neill.

Both Tasha Paxton and Kerrie Turtle had some good chances in the first half but the goals remained elusive going into half time with the score 0-0 and all to play for. Early in the second half Dromore snuck an early goal in but the Dee girls can back with renewed vigour, the equalising goal coming from a lovely pass by Vicky to an awaiting Tasha who took a shot on goals.

The initial shot was thwarted by the keeper but Molly pounced on the rebound to tap it in (with an eager Connie Hampton definitely back in action and on hand to ensure that it definitely went in!)

Buoyed by the prospect of having a chance of getting through to the second round, both teams continued to fight for the win, and it was unfortunate that 5 minutes before full time it was Dromore who succeeded in scoring the winning goal. DLHC wishes them good luck in the next round and the 2XI look forward to competing in the Minor Plate after Christmas.

Thanks to Catherine Armstrong for stepping up and kindly umpiring and also to Emily Morris for filling in until the Dromore umpire arrived. The merry band of DLHC sideline support was once again appreciated by the team who took to the pitch. The Seconds have no match this week and will be back in action on Saturday 10th November at home against NICS 5ths.

Action from the 2XI’s match against Dromore 4XI

Online home of Donaghadee Ladies Hockey Club. You can also find us on Facebook /DonaghadeeLHC and @DonaghadeeLHC on Twitter.
View all posts by Donaghadee LHC →
This entry was posted in 2018/19 Match Reports and tagged dromore, instonians. Bookmark the permalink.