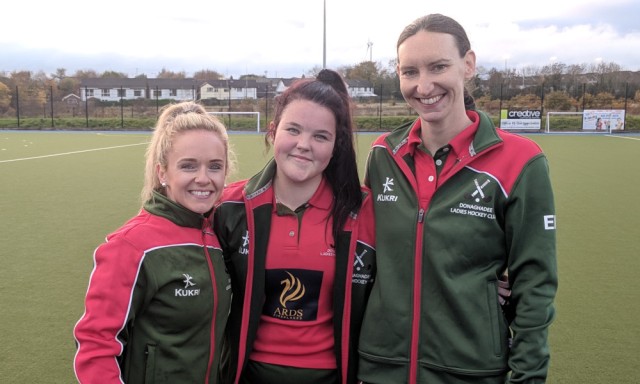 Ruth, Vicky and Emily (twice) were on target against Bangor

Junior League 8B: DLHC 2XI 4-1 Bangor 3XI
With no match last weekend, and with lots of lovely new kit on show, Donaghadee Ladies Hockey Club’s 2XI were raring to go last Saturday when they took on local rivals Bangor 3XI following the 1XI’s 1-1 draw with Newry.

And they certainly got off to a flyer! Virtually straight from the whistle they were on the attack and with only a minute gone Ruth Coulter, making her first appearance of the season, showed she has lost none of her silky skills when she danced past the Bangor defence and scored with her first attempt on goal.

Bangor quickly knuckled down though and both sides enjoyed periods of possession in midfield with most of Bangor’s threat coming down the Dee’s right hand side where they were calmly dealt with by Georgia Ferguson and Captain Kerrie Turtle, this week playing in a very unfamiliar defensive role but doing so brilliantly.

On the rare forays that Bangor made into the Dee half, Natalie Jamieson was always there to break up the play and drive the ball back up field. During one of her trademark runs she was fouled just over the halfway line – her resulting free hit was picked up by Erin Hamilton racing down the right wing and her cross into the circle was converted by Vicky O’Neill to double the lead.

The next Dee attack came from a lovely flowing move down the left flank. An interception by Ruth almost in the Dee’s circle was worked up the pitch with some great exchanges between her and Carmen Van Der Schyff, and Molly McKee was desperately unlucky not to get a third for the Dee when she raced onto the final pass but her shot just shaved the post. It remained two nil to Donaghadee at halftime.

The second half saw some positional changes made by the Captain, and they paid off almost immediately. Some lovely interchange play between Molly and Kerrie – now playing as a high forward – led to a penalty corner. Taking the ball cleanly at the top of the circle, Kerrie picked a pinpoint pass to her forward partner Emily Morris who coolly slotted past the keeper, with no sign of the bad back which had kept her on the sidelines for a number of weeks.

And to prove that you can’t keep a good girl down, she doubled her tally just five minutes later; put through on goal by Ruth after another great jinking run, Emily buried her shot with aplomb, giving the keeper no chance.

Katie McKee was tireless in support of her forwards all match, and she nearly got the reward she deserved in the middle of the second half when some nice interchange passing in the circle led to a shot across goal and she was in the perfect position for the deflection, but it flew agonisingly wide.

Donaghadee didn’t have it all their own way in the second half though, and as the match entered the final quarter Bangor began to put pressure on the Dee defence. Hannah McAdam, providing great support from the bench, and Natalie dealt with some sustained attacks brilliantly but eventually Bangor finally broke the stubborn Dee resistance and scrambled a consolation goal past keeper Nicola Patton who had been a virtual spectator the whole game.

It was to be the last action of the game, with Donaghadee running out comfortable 4-1 winners – the power of the new kit! Thanks to Carolyn Scott for umpiring and to the growing band of supporters on the sideline. The 2XI play Armagh away on Saturday, pass back at Ardmore Rec at 4pm.

Senior League 3: DLHC 1-1 Newry
Donaghadee Ladies’ 1XI renewed acquaintances with old adversaries Newry in the 1pm slot at Bangor Grammar on Saturday. The Dee had a lot of go forward ball but struggled to make the visiting keeper work, and it was Newry who took the lead having weathered the initial Donaghadee storm.

The Dee fought back however, with Captain Kerry Kennedy drawing the equaliser in the second half to earn a valuable point, as Donaghadee maintain 4th position in Senior 3. The team travels to St Colman’s High to play Ballynhainch on Saturday, pass back 1pm. 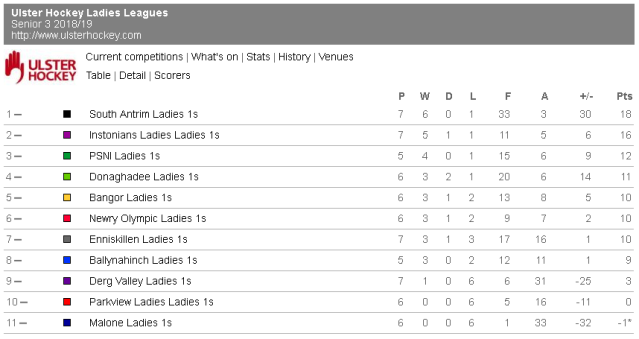 Online home of Donaghadee Ladies Hockey Club. You can also find us on Facebook /DonaghadeeLHC and @DonaghadeeLHC on Twitter.
View all posts by Donaghadee LHC →
This entry was posted in 2018/19 Match Reports and tagged bangor, newry. Bookmark the permalink.
Loading Comments...
Comment
×