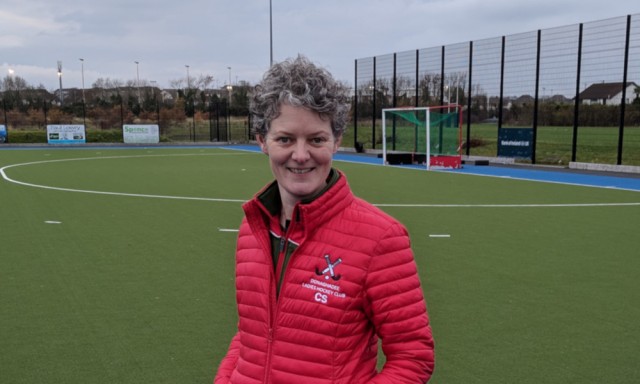 Carolyn with both goals against South Antrim on Saturday

South Antrim have been flying high in Senior 3 so far, with only one loss at the start of the season so Donaghadee could have done without giving them a two goal advantage before they got themselves on the score sheet, but there’s nothing quite like a steep challenge to get things going!

South’s first goal came courtesy of a deflection that shot into the roof of the net, despite keeper Siobhan McAdam almost getting a big glove to it, and the visitors’ second goal came thanks to a goal mouth scramble, the ball falling kindly to an unmarked forward at the back post.

The Dee defence steadied, with numerous excellent interceptions from Claire Stewart and Paige Reilly, and Amy Long picking one save off Siobhan’s pads to drive the ball to safety.

Donaghadee had their own chances to get the scoreboard ticking over; Carolyn Scott with a snap shot that the South Antrim keeper, completely unsighted, somehow managed to deflect wide and Kerry Kennedy – returning to the central midfield berth – testing the visiting number 1 on several occasions with high shots, low shots and a couple in between, without any managing to find a way through.

Early in the second half Donaghadee got the opening they were looking for: Laura Boyle and Emma McGimpsey-Young linked beautifully with a through ball to Catherine Armstrong on the right.

The speedy midfielder wasted no time in finding a ball inside to sister Kerry, who made a splendid defence-splitting pass to Carolyn at the edge of the circle which allowed the forward to swivel and slot low to the keeper’s left. 2-1 to South Antrim and Donagahdee looking back in things.

Donaghadee continued to press and harry, with Vicky O’Neill picking off attempted clearances from the South Antrim defence high on the left and Laura cutting out a number of balls brilliantly on the right. With space in behind, South Antrim then got themselves a break away goal to restore their two goal advantage: 3-1 to them.

With time ticking on, Donaghadee continued to press high up the pitch, and their reward came from a well-worked penalty corner involving Catherine and Carolyn, Carolyn getting the final touch to bring the score to 3-2.

With the wind firmly in their attacking sails, the Dee kept the work rate up and the pressure on: Ali Stevenson patrolling the attacking 25 and firing off a number of dangerous balls from long corners, Leanna McGimpsey-Young probing down the right and Kerrie Turtle making a nuisance of herself in the attacking circle.

Time was against the red and green however, with South Antrim pleased to come away with the 3 points, with their subsequent awarding player of the match to their goalkeeper testament to how well she did to keep the Dee out over the course of the match.

Thanks to Jon Scott for umpiring and to Optimum Care for their sponsorship of this week’s match ball.

The 1XI are next in action on Friday night when they travel to Ballyclare to take on Parkview, passback 8pm.

The 2XI had no match this week but they are back in action away to Saintfield 3XI on Saturday before the mass outing to Grace Neill’s for the club’s Christmas Do.

Online home of Donaghadee Ladies Hockey Club. You can also find us on Facebook /DonaghadeeLHC and @DonaghadeeLHC on Twitter.
View all posts by Donaghadee LHC →
This entry was posted in 2018/19 Match Reports and tagged south antrim. Bookmark the permalink.
Loading Comments...