Senior League 3: DLHC 1XI 4-1 Derg Valley
It was back to winning ways for Donaghadee Ladies Hockey Club’s 1XI on Saturday when they played host to Derg Valley, with a much more cohesive display than of late.

Donaghadee dominated large swathes of this match with plenty of attacking intent right from the off. Indeed Sarah-Louise Baird was quick to drive into the circle from the left flank with the Derg keeper thwarting her at the near post in the early stages. It was a sign of things to come though, with the Derg defence struggling to contain the wing play from both Donaghadee’s wide outlets.

Ruth Coulter – a thorn in the visiting defence’s side all afternoon – mirrored on the right what Sarah-Louise was doing on the left: direct running hard into the danger areas with plenty of ball for the Dee forwards to attack.

Leanna McGimpsey-Young made a welcome return to the scoring charts when she opened the goals for Donaghadee, her screamer of a shot flying past the Derg number 1 from the top of the circle. Sarah-Louise made it two and three in quick succession when she finally got the better of the defence at that near post and Donaghadee were starting to look a bit more like themselves than of late.

There were plenty of attacking options for Donaghadee with twins Molly and Katie McKee interchanging regularly up front, with both showing lovely stick work and plenty of close control to keep the visiting defence under pressure, while Kerry Kennedy threatened regularly with that mean reverse stick shot she has been wont to unleash in so many matches already this season.

The entire Donaghadee team was working solidly as one unit with few gaps for Derg Valley to find any respite. In midfield Lisa Higgins and Helen Hooks pushed up to close the space behind the forwards and Amy Long and Paige Reilly were even finding space to overlap with their wings on the flanks.

That did leave a bit of space in behind however and Derg Valley managed to claw a goal back when they broke quickly and lashed a shot high into keeper Siobhan McAdam’s net from wide on the left just before half time.

It was much the same story in the second half, with Donaghadee enjoying long spells of pressure and it was great to see Ali Stevenson rounding off the scoring with a well-worked penalty corner. Final score 4-1 to Donaghadee, with thanks to Jon Scott and Nicola Patton for umpiring, and to Mark Cooper Pet Portraits for sponsoring the winning match ball.

The 1XI are next in action away to Malone, pass back 1pm at Lough Moss Leisure Centre on Saturday. 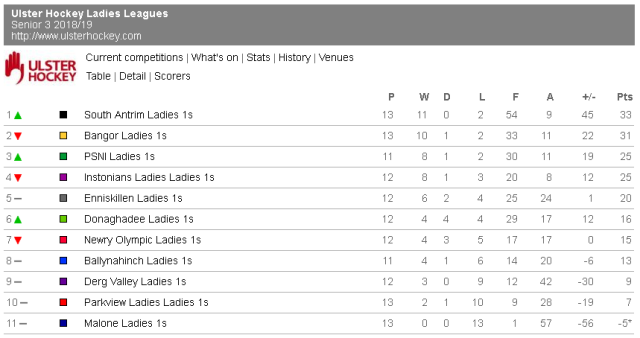 Junior 8B: Bangor 3XI 2-1 DLHC 2XI
Donaghadee 2XI didn’t have far to travel this week for their away fixture against Bangor 3XI.

The match got off to a cracking start with the Dee girls relentlessly pushing up into the Bangor circle. Screens Toria Wightman and Rebecca Bolton ensured the ball was kept away from the Dee defence and allowed the forward line of Deborah Gilmour, Erin Hamilton, Katie & Molly McKee and Kerrie Turtle to attack with full force.

Once such frenzied attack lead to nearly all the forwards getting a shot in on goal but Kerrie managed to get the final touch to put Donaghadee 1-0 up.

Bangor were not going to let the Dee win though and brought on several substitutes from the bench to bolster their team, resulting in pressure on the Dee defence. Having had no touch on the ball until now, keeper Nicola Patton found herself at the receiving end of Bangor’s new attacking players and despite the best efforts of Georgia Ferguson, Natalie Jamieson, Mia Park and Beth Long the Dee conceded 2 goals.

Play continued with Toria and Deborah refusing to give up on the win and pushing ahead with Vicky O’Neill, all having some great runs up the pitch. Molly, Katie and Erin continued to show their fighting spirit and the team continued with more attacks on the Bangor defence, but even with some of Natalie’s trademark solo runs the home side were just too experienced to let another goal in.

The final score of 2-1 to Bangor left the Dee team feeling somewhat flat but they will be determined to win their next match and hopefully progress to a chance for promotion. Thanks again to Janice McVeigh for umpiring and the sideline supporters.

Online home of Donaghadee Ladies Hockey Club. You can also find us on Facebook /DonaghadeeLHC and @DonaghadeeLHC on Twitter.
View all posts by Donaghadee LHC →
This entry was posted in 2018/19 Match Reports and tagged bangor, derg valley. Bookmark the permalink.
Loading Comments...
Comment
×