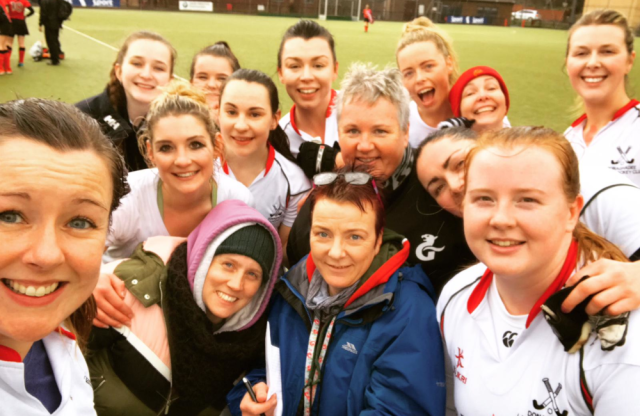 Senior 3: Newry 0-2 Donaghadee LHC 1XI
Donaghadee Ladies 1XI travelled to Newry on Saturday to secure a valuable three points give themselves some daylight above the home side mid table in Senior 3.

Battling terrible weather conditions and initial concerns that the pitch may be unplayable as a result of excess surface water, Donaghadee demonstrated real grit and determination with each individual player stepping up to play their part in what was a great match.

Helen Hooks directed play throughout many of the initial phases of play, intercepting repeatedly and placing fantastic and well timed tackles to deliver the ball to Leanna Young and Hannah McAdam up front, both of whom demonstrated their skill in trying to penetrate the Newry defence.

A number of breaks from Newry were well responded to by Paige Reilly on the left, tirelessly putting in the hard tackles and delivering to Lisa Higgins who showed real positional awareness in getting the ball up to the midfield under Newry pressure.

On the right, Laura Jackson used her fitness to burst up the pitch, making perfect deliveries to Vicky O’Neill, notably developing her confidence in the 1XI squad.

Despite great attaching play, a solid press, and short corners for both sides, the first half ended goalless and the Dee were forced to recognise that the weather conditions warranted a step back to simple hockey and utilisation of frees to their advantage.

The second half started with much more energy and after a short while, the rewards came in with the short corners being awarded to the Dee. A number of the training short corners were tried out, with Paige Reilly finally slotting past the keeper to give Donagahdee the lead.

Despite strong attaching play from the Dee, the even match saw the backs having to really get stuck in with Amy Long making some excellent clearances from the circle and Natalie Jameson tracking right across the pitch to sweep the ball from the attacking Newry sticks to ensure that Dee keeper Siobhan remained protected.

Toria Wightman added to the strength in defence when she came on at left back and immediately got stuck in with the tackles and well timed passes along the sideline to keep Donaghadee on the front foot.

At the other end of the pitch, the corners kept coming, and after a short was secured by Sarah-Louise Baird after an obstruction in the circle, Laura Jackson made it 2-0: a well-deserved goal after a brilliant match for Laura!

Next week sees the 1XI face Ballynahinch at home at 1pm. All support welcome! 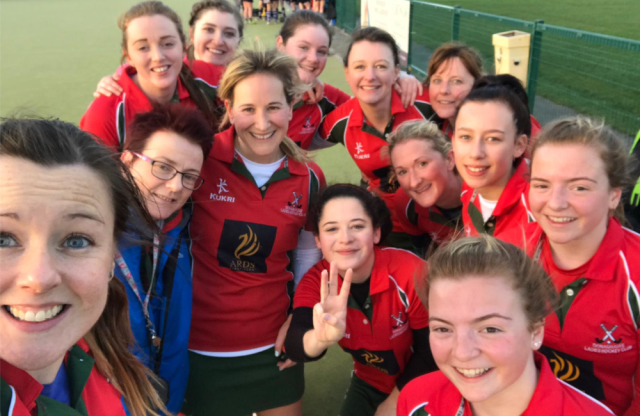 Junior 8B: CI 0-3 Donaghadee LHC 2XI
Thankfully the heavy showers had ended by the time Donaghadee 2XI arrived at CIYMS for their fixture against CI 5XI last Saturday. The game got off to an even start with both teams having opportunities to score, but thankfully the great keeper skills of Nicola Patton ensured that Donaghadee were not put on the back foot in the early stages.

Nicola was well protected by brilliant defending as always by Mia Park who has made her mark on right back this year and Georgia Ferguson as left back who consistently ensures the opposition have a hard time breaking through.

The team were lucky to have back in the fold (hopefully not just for this match!) Nicky McMillen – Nicky showing she has lost none of her old ways when she calmly resumed her old position of centre back with some cracking hit outs and experienced defending.

Tasha Paxton took up the role of right screen for the second week (a position she is proving to be made for her) and along with Toria Wightman (straight off the road from the 1XI’s match in Newry!) kept the distribution of the balls flowing back up the pitch to the awaiting attackers.

The Dee girls began to get the upper hand on CI towards the end of the first half with the team starting to get into their groove as the second half commenced: Katie Donnelly slotted into the centre of midfield to provide valuable link up play, giving captain Kerrie Turtle the chance to resume her favoured position of high forward.

The changes and new positioning gave Donaghadee the boost they needed (or perhaps it was the half time sugar hit?!) but Erin Hamilton, Katie and Molly McKee began to come into their own with all 3 having some fantastic runs up the pitch aided by Heather Kinnear who made the left wing position her own.

The girls’ efforts were rewarded shortly into the second half when some great teamwork saw Molly receive the ball on right wing, and make a terrific run into the circle supported by Katie D who cleverly drew the defender away which left Katie McKwith a clear shot on goal – the teenager coolly unleashing a pinpoint shot into the left corner to put the Dee 1-0 up.

Buoyed by Katieʼs goal, the Dee continued to attack with Katie D pushing higher to give support, and a lovely interchange between both Katies got Kerrie free in the circle with the ball on the end of her stick to slot past the keeper for 2-0.

Not content with equalling the 1XIʼs excellent result earlier in the day Katie was able to get a second shot on target and the Dee ended the game on a high of 3-0.

It has to be said that the 2nd XI have been greatly helped this season by the addition of our new younger recruits Mia, Molly, Katie and Erin who week after week continue to improve and most definitely have a bright future ahead of them at the club. The 2XI are away next Saturday to Parkview at 1pm as the fight for promotion continues.

Online home of Donaghadee Ladies Hockey Club. You can also find us on Facebook /DonaghadeeLHC and @DonaghadeeLHC on Twitter.
View all posts by Donaghadee LHC →
This entry was posted in 2018/19 Match Reports and tagged CI, newry. Bookmark the permalink.