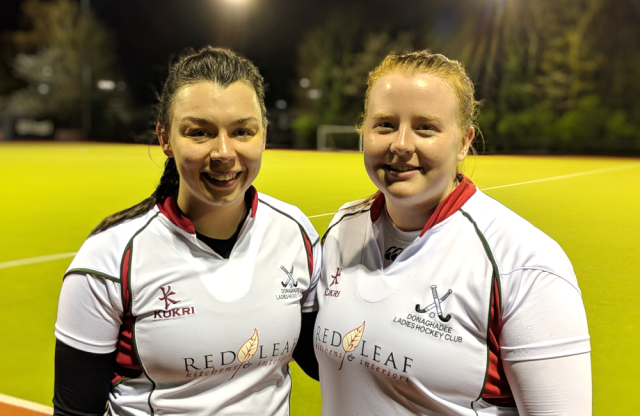 Senior 3: PSNI 0-2 DLHC 1XI
Last Wednesday evening saw Donaghadee Ladies 1XI face their penultimate match of the season away to PSNI. Always a tough opponent, the Dee ladies stepped up to the game with a strong 1XI squad turning out for the mid-week encounter.

Donaghadee took the opening minutes to establish a strong formation and get to know the opponent’s play which was fast paced, driven through the centre and made use of short, quick passes. In the opening phases the Dee made several key intercepts, particularly Lisa Higgins and Kerry Kennedy in the midfield, who delivered the ball up to the forwards and into the circle with aplomb.

A solid back line of Ali Stevenson, Paige Reilly, Amy Long and Natalie Jamieson meant that the long balls through from the PSNI were picked up, or run out of defence with ease before they got to keeper Siobhan McAdam – a virtual bystander for much of the action – and the space created enabled Donaghadee to switch the play around the back to allow Sarah-Louise Baird and Helen Hooks to drive forward up the flanks.

Despite great attacking play, a solid press, and time spent predominantly in the PSNI half, the first half ended goalless, but with a lot of positives to take away for the half time team talk.

The second half got underway, and Donaghadee were careful to take the time and re-settle into the match. After some fantastic interplay in the midfield, the ball made its way to Hannah McAdam who found the corner of the goal to give Donaghadee the lead.

The attacking Dee play continued to put PSNI defence under pressure and after securing a penalty corner, Paige took her opportunity to slot the ball past the keeper, making it 2-0 to Donaghadee (dedicating her goal to faithful supporter, Janice Reilly, on her birthday)!

Despite several really good chances – Kerrie Turtle agonisingly inches from connecting with a super cross at the back post and Vicky O’Neill bursting through at the top of the circle – the PSNI defence held firm to leave the final score 2-0 to Donaghadee. Thanks to Carolyn Scott for umpiring.

The final match of the 1 XI season will be at home to PSNI (previously postponed earlier in the season due to unplayable conditions), date to be confirmed, while a Donaghadee XI will take on Ulster O50s at BGS tomorrow night (Wednesday), pass back 7.30pm. 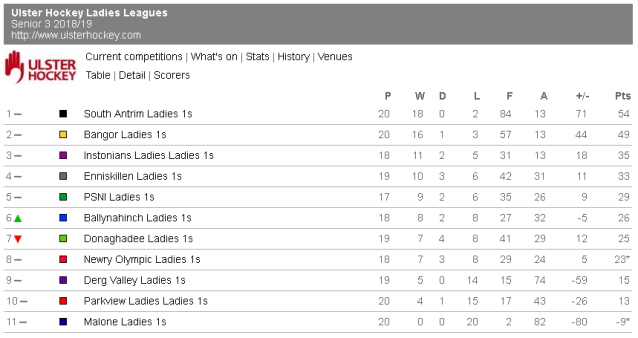 Online home of Donaghadee Ladies Hockey Club. You can also find us on Facebook /DonaghadeeLHC and @DonaghadeeLHC on Twitter.
View all posts by Donaghadee LHC →
This entry was posted in 2018/19 Match Reports and tagged PSNI. Bookmark the permalink.
Loading Comments...