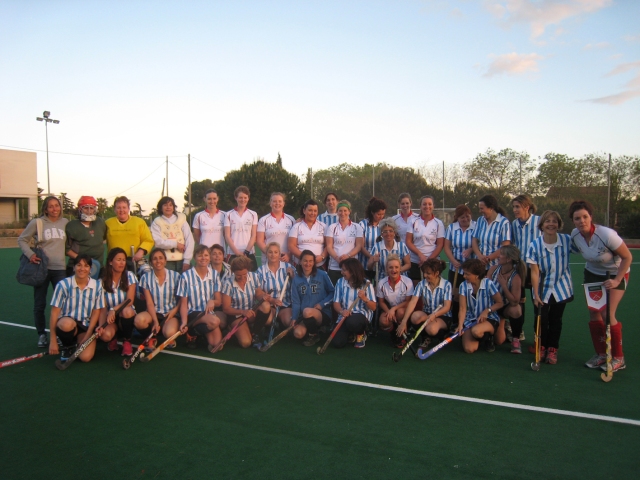 In a season when Donaghadee Ladies Hockey Club entered a 2nd XI into the league programme for the first time since the 80s (with the team finishing in a very creditable mid table position), the Club also embarked on its first overseas tour with a trip to Lloret de Mar just north of Barcelona last weekend.

Eleven players made up of both the 1st XI and 2nd XI teams along with manager Will McAdam set off early on Friday morning, heading for their furthest away game to date against the Egara Mamis team from Terrassa, Spain. After arriving at the hotel and suitably refreshed, the Dee made the hour long bus trip to fulfil their fixture. Greeted by two of the host club’s English speaking players, Donaghadee were most warmly welcomed to the superb facilities of Club Egara – a massive club boasting numerous Spain international players past and present amongst their ranks. Fortunately for the Dee however none of the internationals were representing their club on Friday evening.

The match took the format of three 20 minute periods which allowed the home team to give a run out to all their players who had turned out for the game and was welcomed by Donaghadee who, having come from seemingly endless wet and windy Saturdays this season, found the Spanish Spring air considerably warmer than conditions back in NI.

Before pass back the two clubs posed for team photos and Dee captain Suzie Ferguson presented Egara with a DLHC pennant to mark the occasion. From the start of the match it was evident that Donaghadee were the stronger team, immediately putting the home team under pressure, and not taking long to get on the score sheet through centre forward Kerrie Turtle. The tourists added another couple through Kerrie and Carolyn before a transgression in the Dee circle allowed Egara back into the match. In a variation to the usual penalty corner routine, it was agreed by both teams at the start of the match that in the event of a foul in the circle, an attacker would be allowed a one on one shot against the defending keeper. Egara used this to their advantage and, despite a diving effort by Dee keeper Siobhan McAdam, got themselves on the score sheet. This period continued in much the same vein with good Dee pressure and Egara keeping in touch through their penalty corner shots.

Cheered on by Will and Lisa Higgins on the sideline, the Dee mixed up their positions in the second period, with Ruth Kennedy on left wing and Emily Morris on right dropping back into midfield to play alongside Ali Lawther and Deborah Gilmour. Hannah McAdam went up front, with Carolyn and Kerrie slotting in as the last line of defence with Lisa Alexander in front of Siobhan. The match continued on its good natured way with the final score 8-5 to Donaghadee. After hearty congratulations all round both teams retired to the magnificent club house with its sun terrace overlooking the main pitch to enjoy a well deserved drink and feast laid on by the hosts; Donaghadee delighted to have kicked off their international careers with a win.

The following day was left free for enjoying the surroundings of seaside Lloret de Mar with everyone opting for a lazy day on the beach, followed by sampling the highlights of Lloret’s nightlife. The final full day saw the intrepid tourists heading down the coast for a day’s exploring and shopping in Barcelona, both of which were enjoyed by all, the day rounded off by a delightful meal in one of the city’s many squares. The flight home on the Monday completed the weekend with twelve weary but happy tourists hoping to enjoy another visit to the wonderful city of Barcelona in the not too distant future, not to mention another “international” hockey tour!