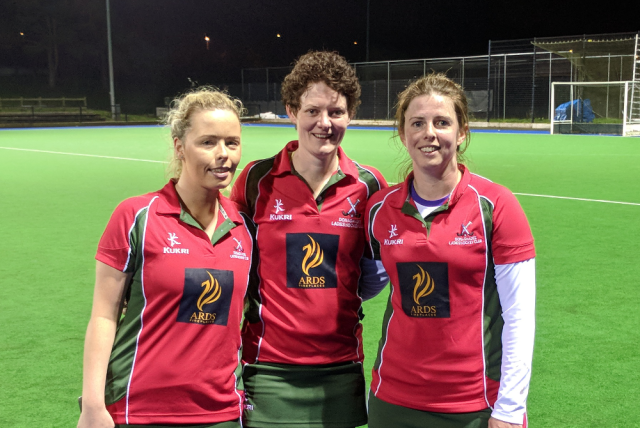 The Dee girls have traditionally found this Friday night fixture a tricky one and it’s always a closely contested game with Instonians so this had the potential to be a difficult one for Donaghadee.

In much the same vein as the previous week, Donaghadee started brightly with plenty of attacking intent; there was lots of action in the attacking circle with both Leanna Young and Kerry Kennedy flashing high shots just across the face of the Instonians’ goal with no final deflections to take them over the line.

It wasn’t long before Leanna connected with one to add to her growing goal tally for her new club however – her strike from wide left beating the keeper at the near post to give Donaghadee the lead.

Paige Reilly then came close at an attacking penalty corner when she narrowly missed popping the ball in from a tight angle: she was mere inches from turning the ball round the post.

Instonians were straight back on the attack and Amy Long was on her mettle to intercept several threatening runs as Instonians attacked down their left. Keeper Siobhan McAdam then did her bit to retain the Dee’s lead, bravely saving a shot straight at her midriff.

Instonians’ pressure told however and they bundled the ball over the Donaghadee line to equalise midway through the first half. Undeterred, Donaghadee kept pushing forwards and Carolyn Scott was next to score when her bullet of a strike evaded both keeper and the player on the line at a well worked penalty corner. 2-1 to the Dee going in to half time.

With defender Claire Stewart leaving the action at half time for another engagement, a defensive reshuffle was required and Donaghadee’s lead was shortlived with Instonians taking advantage of the Dee’s failure to clear the ball to bring the score back level at 2-2.

There was a collective gritting of Donaghadee teeth – no more so than when Lisa Higgins in midfield took a deflected ball to the jaw – and the Dee got back to it. Another attacking penalty corner resulted in another goal: this time Ali Stevenson picked up a rebound and calmly picked her spot. 3-2 to Donaghadee.

And then, just to keep the travelling Dee support on the edge of their seats, the home side scored again, unsurprisingly much to their delight. 3-3. (Are you still keeping up?)

All match Donaghadee had been using the flanks to their advantage with Emma McGimpsey and Laura Jackson – with pace to burn – driving into the attacking circle from the right at every opportunity and Helen Hooks probing on the left.

With the umpires having signalled two minutes remaining, there was one last foray down the left for the Dee when young Natalie Jamieson made terrific progress as she outpaced several Inst midfielders before being unceremoniously upended by a defender just on the 25.

Leanna had the presence of mind to take the free quickly and with the Inst defenders all out of position, she found Carolyn unmarked in the circle. Rounding the keeper, Carolyn added her second and Donaghadee’s fourth in almost the last action of the game to give the Dee a very hard fought for three points. Final score 4-3 to Donaghadee. Thanks to Mike Smyth for umpiring.

The Firsts are at home to Ballynahinch on Saturday, pass back 1pm.

DLHC 2XI forwards enjoying themselves during the Derg Valley game

Junior League 8A: Donaghadee LHC 2XI 4-1 Derg Valley
The 2XI welcomed Derg Vally to Bangor Grammar last Saturday, with the home team hoping to make it back to back wins for the first time this season after their cup success last week. Whether it was the long drive or the fast tempo of the Dee’s opening forays, the opposition were slow to get started and found themselves 1-0 down very early on.

A lovely combination move from Katie Donnelly and Emily Morris on the right of midfield took the ball high up the pitch, and forward Laura Jackson did the rest, beating two defenders with ease and getting her shot past the keeper.

The early goal gave Donaghadee great spirit and belief, and it showed through their attacking flair and assured passing. The lead was doubled shortly afterwards – Lisa Higgins with a quickly taken sideline ball drove towards the circle and found Emily at the top edge. Her pinpoint shot made its way through a crowd of players and into the back of the net.

The Dee continued to dominate possession and territory, with Derg Valley rarely threatening the home goal. In spite of being spectators for most of the half, the Dee defensive unit of Georgia Ferguson, Nicky McMillen and Natalie Jamieson performed brilliantly when called upon, snuffing out any attacks with ease and carrying the ball back into attack.

Just before half time, one such move saw the ball driven out of defence and picked up by Carmen Van Der Schyff, on the left of midfield. Carrying the ball strongly down the left wing, Carmen put in one of her trademark reverse stick crosses to Vicky O’Neill, fresh off the subs’ bench, who took a shot at goal.

The defence held firm for the initial shot, but there were plenty of Dee players in the circle for the rebound, and after a little hockey pinball, the ball eventually fell to Kerrie Turtle who made no mistake with her strike. 3-0 to Donaghadee at half time.

There must have been some stern words in the Derg Valley dugout at the break, and they came out fighting for the second half. On the attack from the whistle, they earned a penalty corner from their first real visit to the Dee’s circle and executed it beautifully with an unstoppable shot past keeper Janice McVeigh who, up to that point had not had a shot to save.

It set the tone for the next 10 minutes, with the play far more evenly balanced. As Derg Valley pushed on again, the Dee defence was beaten for the first time and Janice was called on to make a great save to prevent them reducing the deficit still further, which she did with her usual aplomb – it turned out to be the only touch of the ball she had all match!

Galvanised by the save, Donaghadee returned to their free-flowing hockey of the first half for the rest of the match. Sarah Harkness was proving pivotal in her advanced midfield role, with pin-point ball distribution in attack and making herself available in the circle for numerous shots on goal.

Unfortunately by this time, the Derg keeper had well and truly got her eye in, and nothing was getting past her it seemed – she saved every shot from Sarah that came her way, and Kerrie too was desperately unlucky not to tuck a few more away at the back post.

Sarah thought she finally had her goal when she picked up the ball from Lisa following a long corner, but her clean strike from the top of the circle was just touched in by Laura for her second of the afternoon. Laura was then unlucky not to get her hat-trick, as her strong running and silky skills created a few more chances before the final whistle, but it was not to be.

Final score was 4-1 to Donaghadee, and a very pleasing performance all round. Thanks to Nicola Patton and Mike Smyth for umpiring, to all the spectators who gave their support and to Coast Holywood for sponsoring this week’s match ball. Next up for the 2XI is a trip to CI 5XI.

Online home of Donaghadee Ladies Hockey Club. You can also find us on Facebook /DonaghadeeLHC and @DonaghadeeLHC on Twitter.
View all posts by Donaghadee LHC →
This entry was posted in 2017/18 Match Reports and tagged derg valley, instonians. Bookmark the permalink.
Loading Comments...
Comment
×